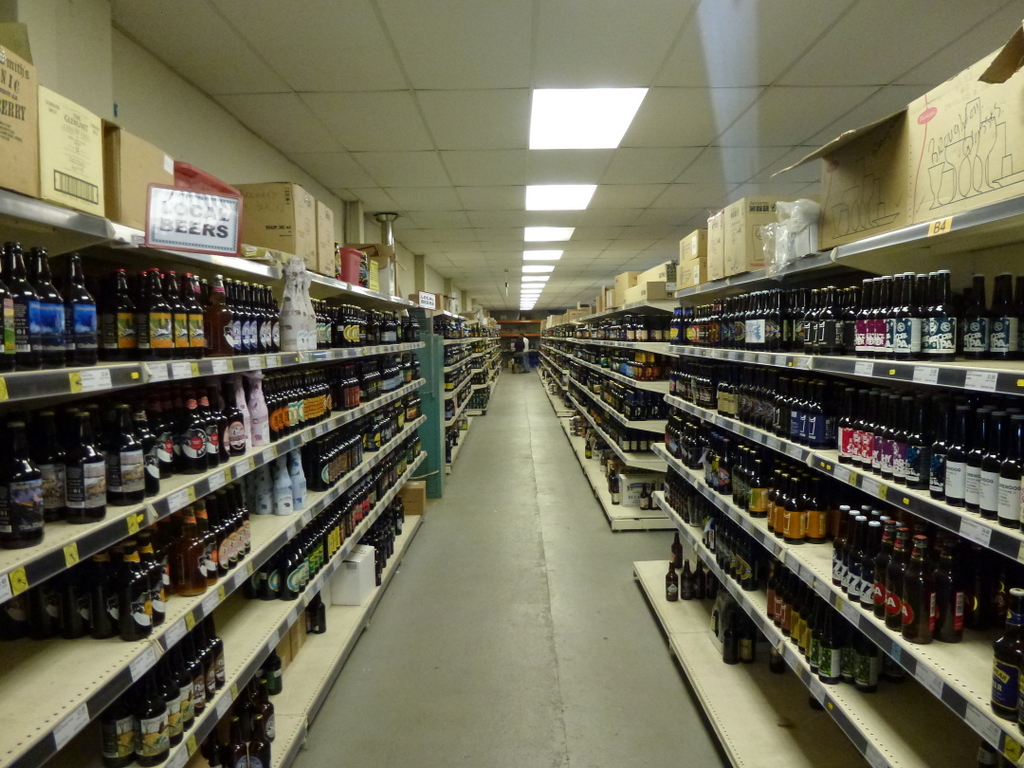 I’ve ordered mixed crates of bottled beer from Beers of Europe before but a combination of a work-free Friday and noticing online that it had received some hard-to-get (and much-desired-on-my-part) Belgian bottles led me to visit the company’s retail premises in person.

Open to the public seven days a week, Beers of Europe is located on a typical industrial estate in Setchey just south of King’s Lynn in Norfolk. The warehouse is fairly well situated for visiting continental brewers or receiving stock via eastern England’s ports (including King’s Lynn) but I can’t say for sure that that’s why it’s in Norfolk. Still, it made for a pleasant and at times interesting drive, especially passing under US military jets from RAFs Lakenheath and Mildenhall.

While Beers of Europe doesn’t hail itself as the most exciting or even simply the biggest beer shop in the UK, it’s quite possibly both. For a beer aficionado Beers of Europe is about as good as it gets in the UK. Certainly, I don’t know of anywhere with a larger or more diverse selection and I’ve been at this game for a long time now. (If you do know of anywhere more impressive and open to private buyers please let me know.)

The 14,000 sq ft warehouse is organised into three main aisles – corridors might be a better description – lined on both sides with some 150,000 bottles, of over 3,000 varieties (so says the website blurb). British brewers are, as should be expected, exceptionally well represented with some real oddities and limited releases mixed in with better-known brands, while Belgian and German brewers are also given ample shelf space. Recent converts to good brewing also receive a decent showing, including some common and some more unusual offerings from micros and “craft” brewers in the USA, Italy, Denmark, Norway, New Zealand and others.

Beers of Europe even provides space for both mainstream and more obscure beers from less obviously enthusiastic beer lands, including many around the Mediterranean. Add in a more than half-decent selection of spirits, including some very good whiskies, rums and gins (covering about half of one whole aisle altogether), and a range of world wines and this Norfolk warehouse offers a real Aladdin’s cave for enthusiasts of interesting alcoholic drinks.

As hoped I was able to pick up the particular bottles that brought me to Norfolk – Horal’s Oude Geuze Mega Blend 2011 created from the produce of eight of Belgium’s traditional lambic brewers and both the 2007 and 2008 production of the straight-from-the-wood Rodenbach Vintage Oak Aged sour red-brown ale. As expected I wasn’t able to stop there, going on to select an entire shopping trolley’s worth of bottles. Totalling about £220. Ouch!

Still, my splurge should keep me in good beer until well into the New Year and probably beyond. Some bottles, especially the Belgians, have best before dates long into the decade and even beyond. Given that I still have a fair few bottles acquired years ago – including a 1989 Eldridge Pope-brewed Thomas Hardy Ale and a 1991 Belle-Vue Selection Lambic Gueuze (whether I should drink these remains an open question) – the chances of one or more of these joining my “cellar” of aged beers are quite high.

To give you an impression of the selection on offer I’ll post a gallery of my purchases next time. I’ve mentally already decided I’ll have to go back for another visit. The cost of petrol was more than adequately compensated for by the childlike “kid in a sweetshop” sense of excitement I’d experienced while shopping (sad huh!). I’d recommend it to anyone with an interest in good beer.

For those who can’t make it in person, Beers of Europe offers sensible prices and very competitive shipping on mixed cases of any size (from £7.49 for next day delivery). Give it a go before Christmas!