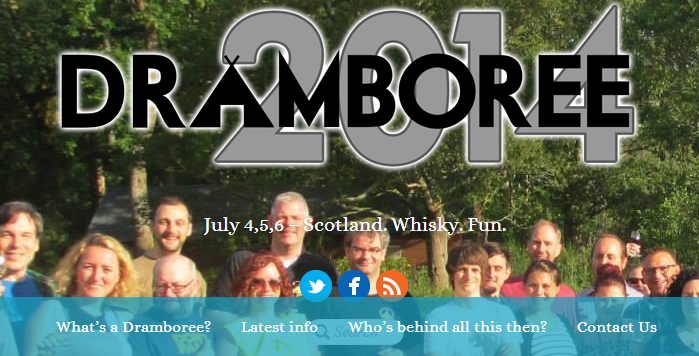 A weekend at Dramboree 2014 on the shores of Loch Lomond in early July sampling a wide array of mainly Scotch whiskies had me thinking about the spirit, its drinkers, the event and my own relationship with uisge beatha.

While this isn’t meant as a “review” of Dramboree a few words of explanation are probably useful. Inspired in part by the Dutch Maltstock, Dramboree is an informal gathering in Scotland (at least so far) of whisky enthusiasts and aficionados (around 60 this year) intended to foster new friendships, share whisky stories, discover new drams, learn a little, and this year – if the mood took – the opportunity to take a “loony dook” in the less than tepid waters of the loch.

END_OF_DOCUMENT_TOKEN_TO_BE_REPLACED 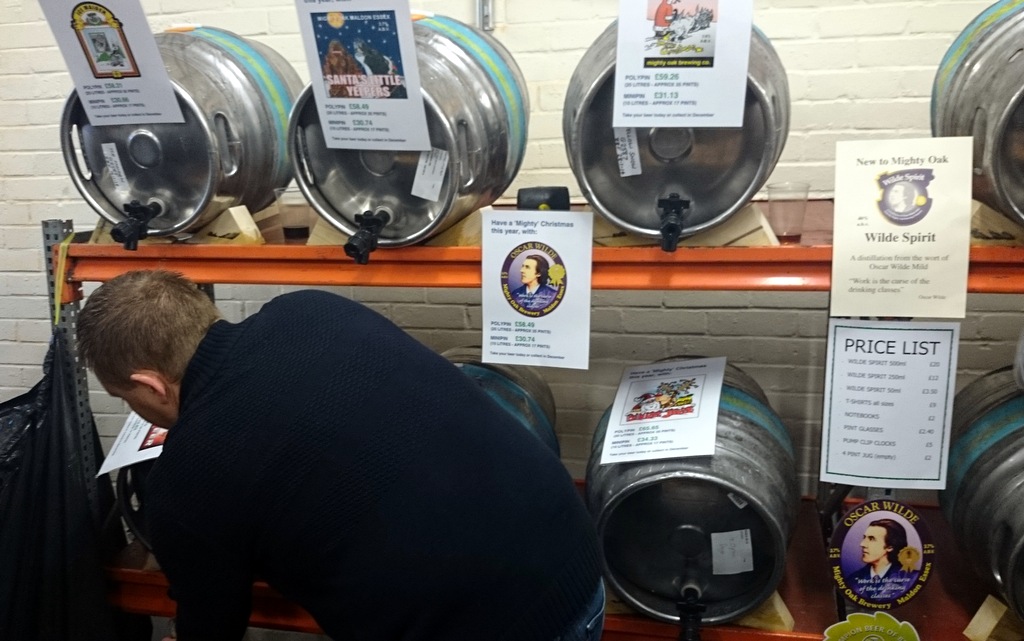 The last day of November took me to Essex brewer Mighty Oak’s annual free beer open day at its brewery in Maldon, to the east of Chelmsford. The event provides a showcase for the brewery’s wares – including selected barrels of its regular brews and an extensive lineup of seasonal specials – designed to create good will and to help secure take out orders of 36 pint pins and 18 pint mini pins for Christmas.

Both looked to be well on the way to selling out by the time I left, so the effort was clearly a worthwhile one. I didn’t myself end up walking away with an order for Bingle Jells, Rockin’ Reindeer or one of the seven other Christmas ales on offer (I’m not convinced that Yellow Snow was an obvious draw, though the beer itself was more than decent). What I did walk away with was rather more unexpected. END_OF_DOCUMENT_TOKEN_TO_BE_REPLACED 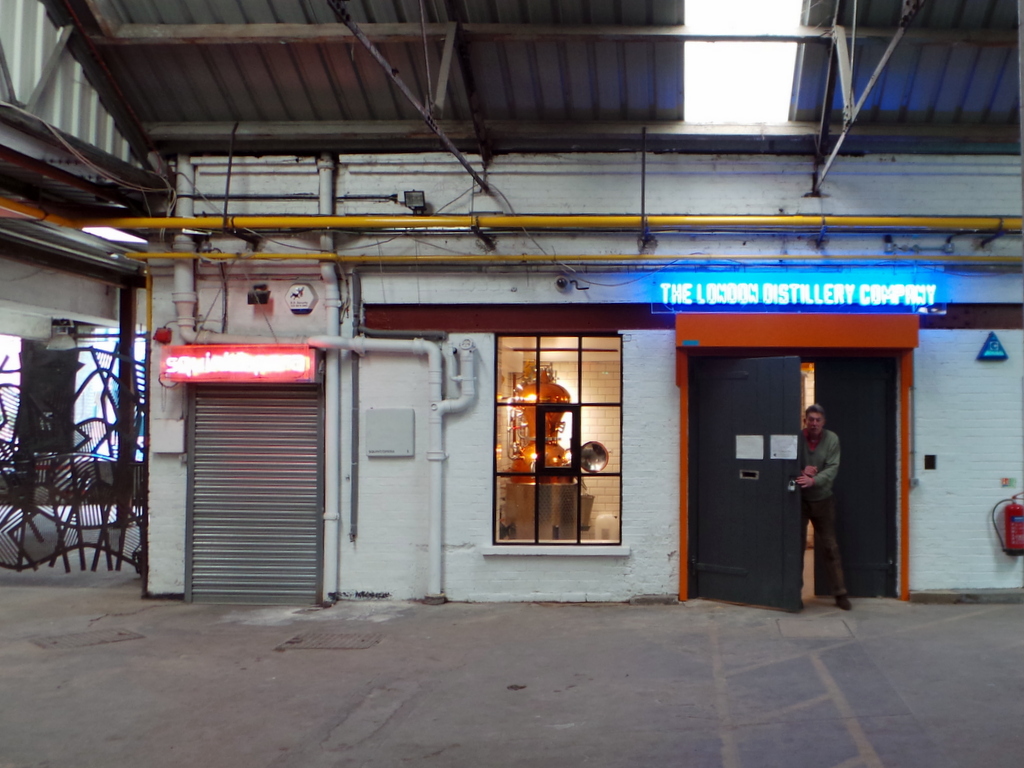 As a reasonably established member of Whisky Squad I recently took up the offer of a Saturday “field trip” to The London Distillery Company (or TLDC for short) in Battersea. The first whisky distillery in London for over a hundred years – the former Lea Valley Distillery, in Stratford, east London apparently ceased making the spirit in 1905 – is the brainchild of Scotch Malt Whisky Society and Glenmorangie alumnus Darren Rook and investor (and former microbrewery owner) Nick Taylor.

I’d previously met Rook at last October’s TWE Whisky Show when TLDC was still little more than a business plan and was intrigued to see how far the project had progressed. Situated in a former dairy in a remote corner of Battersea, next to Ransome’s Dock, TLDC now boast two stills (Christina the gin still and Matilda the whisky still) and four mash tuns and washbacks (two of each I think). There’s also room for a dedicated spirit still (Matilda will serve as both wash and spirit still for the time being), some limited barrel storage (the rest will be kept in a bonded warehouse somewhere in London) and desks made from wood reclaimed during the dairy conversion.

END_OF_DOCUMENT_TOKEN_TO_BE_REPLACED 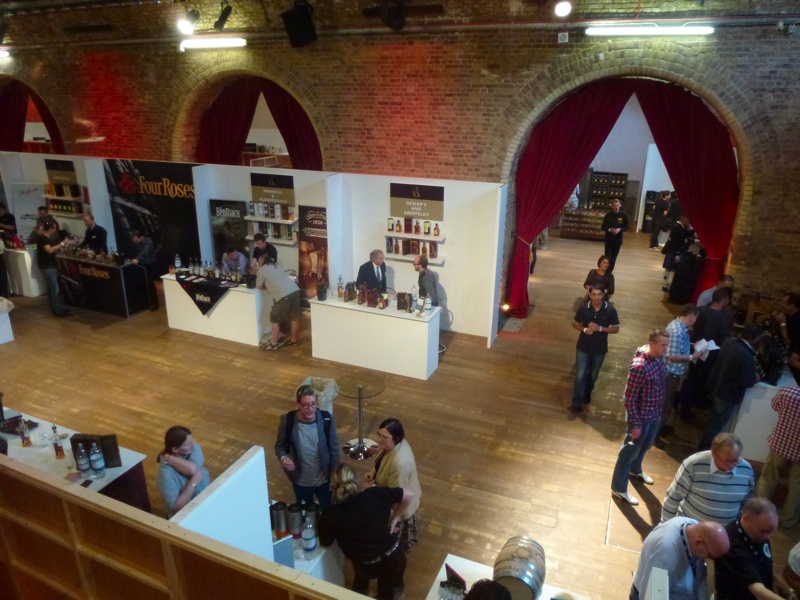 Apologies for the recent blogging hiatus here at Alt-Tipple Towers. The back end of 2012 turned out to be bit fraught for a variety of reasons and so this already delayed post was pushed back further and further. Still, its emphasis on the products of new wave world and micro whisky distillers (a topic I’m very keen on) meant I felt it was worth resuscitating despite being started last October. So here we go.

Unexpected good fortune in early October 2012 saw me in attendance at The Whisky Exchange Whisky Show at Vinopolis wine complex near London’s South Bank and what a superb day out it was.

A barely remembered entry of my name and email address into an online raffle on the Whisky Marketplace price-comparison website won me two Sunday tickets, worth a cool £99 each, to the capital’s biggest whisky event. With my whisky-loving friend Cliff in tow I headed to London Bridge and joined the queue heading in at noon.

END_OF_DOCUMENT_TOKEN_TO_BE_REPLACED 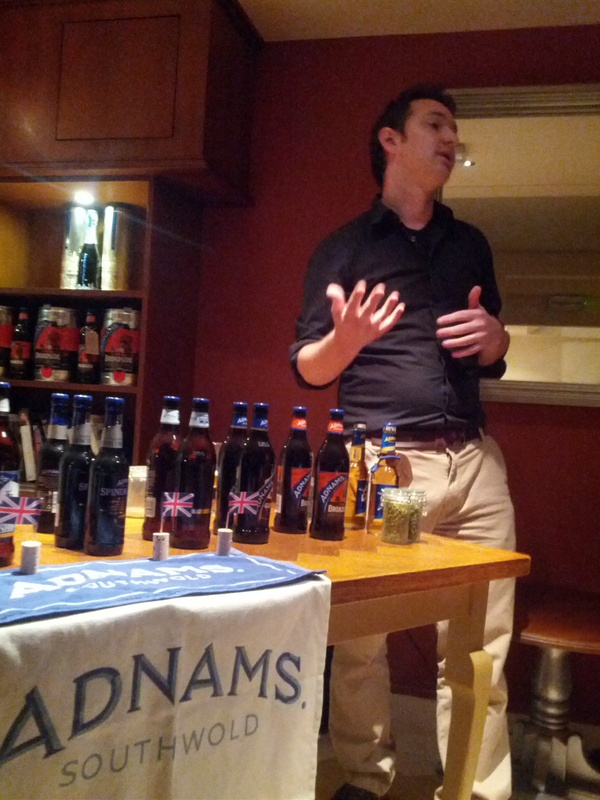 Yes, yes, I know I’m writing about Adnams again but that’s because it’s perhaps the most progressive of the old established brewers in Britain and regularly has new things to shout about.

Anyway some friends and I, including fellow blogger The Guest Ale (until this point an Adnams sceptic, you can read his take on the same event here) couldn’t resist the offer of £10 tickets for a guided tasting of Adnams’ many beers in September in the company of its head brewer Fergus Fitzgerald. And what a well spent £10 it proved to be.

Given the surroundings, downstairs at the Adnams Cellar & Kitchen store in Bloomsbury, a tasting of Adnams ales in cask-conditioned form would have been impractical. And the company doesn’t produce bottle-conditioned beers due to their wide distribution and requirement for a decent shelf-life. Nonetheless, Adnams beers seem particularly resistant to the brewery conditioning process that often knocks the stuffing out of many other breweries’ products, managing to maintain the house character derived from the Southwold brewer’s uniquely spicy yeast. Either that or Adnams has developed a far more sympathetic process.

END_OF_DOCUMENT_TOKEN_TO_BE_REPLACED

I’d heard of Whisky Squad long before I finally attended one of their tasting evenings. As a regular drinker at my favourite Clerkenwell pub The Gunmakers until my work moved to the West End last year, I’d several times been kept from sitting in the back room because it had been booked out, according to pub landlord Jeff Bell, by “a bunch of folk drinking whisky”. Or some words along those lines.

Strangely, given that I’m a considerable enthusiast for beer’s distilled cousin, I didn’t enquire any further at the time. As such, I only recently came to full awareness of the Squad through some random web surfing and avowed that I’d get along to one of their £15 sessions ASAP.

Whisky Squad events are extremely popular with those in the know and demand commitment to reserve a place, tickets going on sale online for the (usually) two or three events a month at an appointed time and data and typically selling out in minutes.

END_OF_DOCUMENT_TOKEN_TO_BE_REPLACED 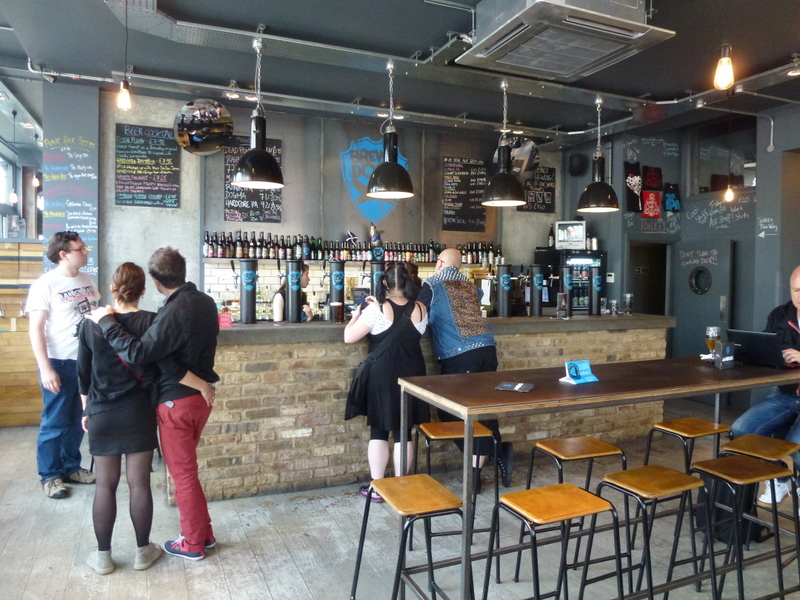 Saturday last week brought my first opportunity to attend a kind of beer event that I expect will become more common in future.

The mischievously-titled Un-Real Ale Festival in North London, promoted by BrewDog’s Camden branch plus other local brewers and outlets, was described as an opportunity to sample beers “banned” from CAMRA’s Great British Beer Festival this week on account of their being brewery conditioned or “keg” in the real ale drinker’s parlance.

BrewDog’s antagonism towards CAMRA is well known, the brewery seeing CAMRA’s cask- and bottle-conditioned position as shortsighted. This is a view I have a great deal of sympathy with. Modern keg is a million miles away from the filtered, pasteurised, gassed up, preservative laden (and usually under-strength) abominations that inspired CAMRA’s creation. Nowadays they’re often themselves unpasteurised and increasingly unfiltered (sometimes to the point of turbidity, see below), much in line with what CAMRA itself advocates.

That’s not to say that cask and keg are equivalent. Cask-conditioning in the pub (as well as bottle-conditioning) remains for me a peerless way – when executed to perfection – to add an extra dimension of complexity to ales (it doesn’t always work well for so-called “real lagers” in my view), especially Britain’s lower strength variations such as bitter and mild. But many (many) modern keg beers I’ve sampled, whether in Britain or abroad (check out many of the posts on this blog), have been excellent and they certainly offer outlets that aren’t geared up for “real ale” (i.e. most outside of the UK and quite a few in it) an opportunity to invigorate and participate in the global rebirth of interest beer and to spread the word.

END_OF_DOCUMENT_TOKEN_TO_BE_REPLACED 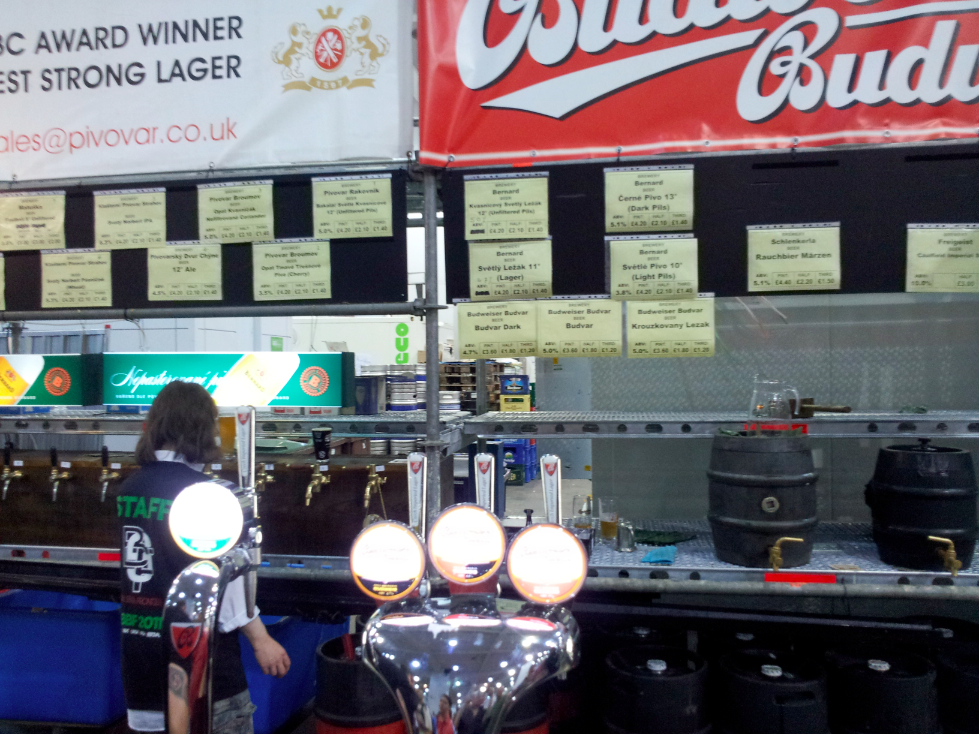 Tuesday’s opening night at The Great British Beer Festival 2011 marked the 21st consecutive year that I’ve made the pilgrimage to this temple of beer. Ever since the festival made its permanent home in London, in fact, although the current event bears little resemblance to the one-off edition that began my adventure at the London Docklands Arena in 1991.CAMRA clearly learned a lot from that Dantean Inferno of an event, which – on the day I visited at least – saw most of the beers on offer dispensed at a temperature more akin to that of a brew kettle at full blast than that of a cool cellar. GBBF moved the next year to the greater expanse of Olympia where it stayed until 2005 (it’s going back in 2012) while barrel cooling jackets rapidly became de rigueur at all CAMRA festivals. The overall excellent condition of the various tipples sampled on Tuesday night at Earls Court, which would largely have passed muster in a Good Beer Guide-listed pub, is testament to the skill and knowledge that the Campaign’s volunteer army brings to the World’s biggest bar.