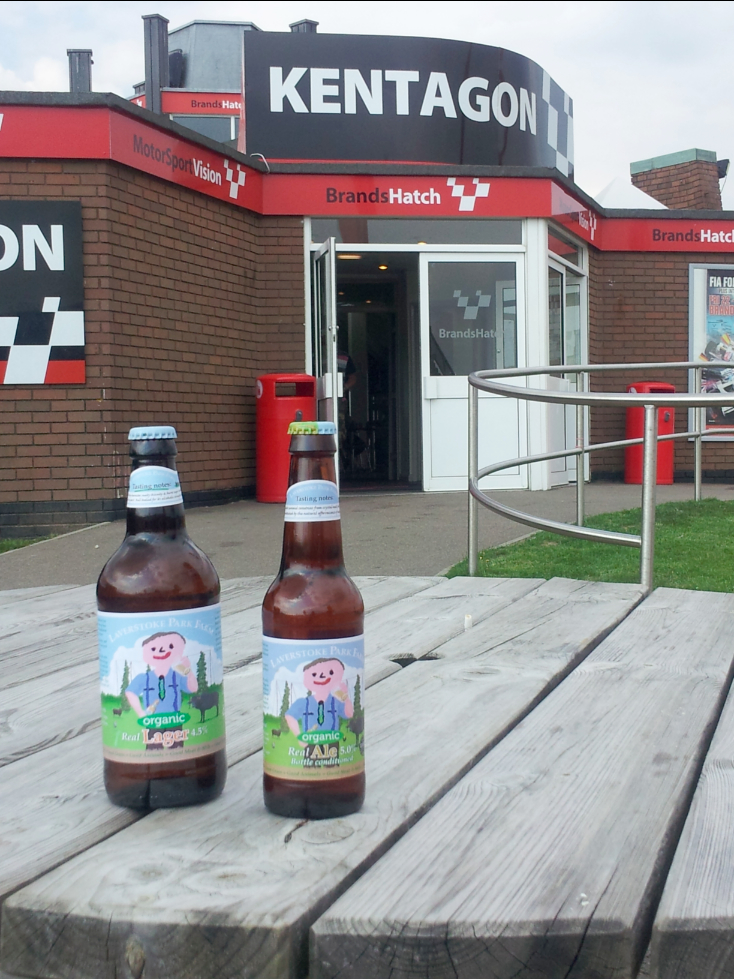 As a longstanding motor sport enthusiast I’ve become accustomed to spending several long, hot days each summer in the beer desert that is, or rather was, Silverstone, longstanding home of the British Grand Prix. Fosters, Carlsberg, Guinness and John Smith’s Extra Smooth were pretty much the only options for the thirsty racegoer for years, dictated by event sponsors and controlled supply.

No more. This July’s event boasted a small number of outlets where the cask ale drinker could slake their thirst with something nearer to their preferred pub tipple. Although it still takes a reasonably committed drinker to hold out for a better brew when they’re so widely spread out across the event site.

On the circuit perimeter itself, the aptly described Real Ale & Traditional Cider trailer this year had decently presented brews from Oxfordshire brewer Hook Norton, including the excellent Hooky Gold. A year ago the same stand offered the more obscure Owd Bull and Gamekeeper’s Bitter from Hereford Brewery.

More impressively, the Grand Prix even boasted its own brews this year, with the appropriately named Pit Stop and Pole Position ales being offered in the main campsite’s temporary “pub”, The Petrol Head. Unfortunately the under-pressure staff couldn’t name the brewery behind the two bitters (my guess they were both local and both renamed for the event) but they were perfectly acceptable under the circumstances, if not inspirational. Which was as much to do with less than ideal storage conditions and extremely rapid turnover than it was the quality of the beers themselves.

Points for effort nonetheless and the rapid emptying of the gravity dispensed barrels gives me hope they’ll be back again next year.

Following the venture’s successful application of biodynamic farming principals for meat and dairy produce, Scheckter subsequently turned his hand to beer. Both a pale lager and a bottle-conditioned bitter are now on offer using malt and hops from Laverstoke, albeit both contract brewed by Hepworth in nearby West Sussex. Both beers are available bottled from selected outlets, both online and on the high street. As I discovered at a recent race day, these include the six-sided Kentagon clubhouse at the awesome (and unspoiled) Brands Hatch circuit in Kent. More beer alternatives for track goers has to be a good thing.

Laverstoke Organic Real Lager (4.5% ABV) offers a decent interpretation of a pale continental lager, with a biscuity toastiness on the palate, a decent level of earthy hoppiness and a deep gold colour offering several nods to its English provenance. Likewise, Laverstoke Organic Real Ale (5% ABV), a very typical English bitter that avoids the current fixation with light golden ales by leaning towards amber.

Overall my vote goes to the Organic Lager, a worthwhile entry in the small but growing array of quality British-made lagers, although what the “Real” in its name signifies is unclear. It’s certainly a beer I’d be happy to reacquaint myself with given the opportunity. In comparison, the Organic Real Ale was a bit fizzy for a purely bottle-conditioned brew. While this effervescence added a little to the peppery hops on the tongue, overall the beer fell a little flat, metaphorically if not literally. It does, though, deserve some points for being of a more coppery hue than is often the case in these golden ale-fixated times.

Scheckter turned his hand to developing firearms training simulators after he hung up his helmet in 1980, making a great success of it. His latest reinvention as organic farmer and beer advocate seems somehow an unsurprising development from this remarkable man. And one not only beer-loving racegoers can feel some affinity with.

If only other World Champions had their own brews. A pint of Mansell’s Mild anyone?